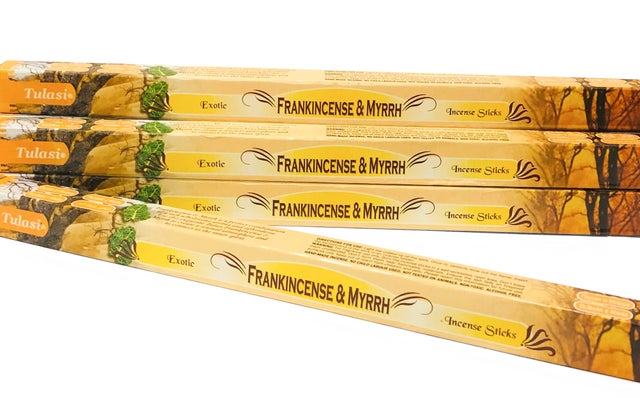 Tulasi Masala Incense is made with incense making skills passed down through three generations of fine incense makers.

USE FRANKINCENSE & MYRRH IN YOUR HOME to:

*Create a spiritual and peaceful atmosphere

*Bring about a sense of calm and relaxation

Frankincense and Myrrh symbolize various aspects of our life here on earth – the bitter and the sweet, the good and the bad. Frankincense is sweet and spicy and is one of the consecrated incenses described in the ancient scriptures. Myrrh, on the other hand, is bitter and more pungent. It is one more most oft-used essential oils, and it has been recorded as being used for soothing minor bruises, aches, and sprains. It was also mentioned to be used as part of the dressing for Jesus’ burial. Therefore, frankincense and myrrh, when used together, bring a balancing presence to our lives. Use this exquisite Tulasi Frankincense & Myrrh to create a sensual atmosphere and to connect to the inner spirit.

What are frankincense and myrrh?

Both frankincense and myrrh are derived from the gummy sap that oozes out of the Boswellia and Commiphora trees, respectively, when their bark is cut. The leaking resin is allowed to harden and scraped off the trunk in tear-shaped droplets; it may then be used in its dried form or steamed to yield essential oils. Both substances are edible and often chewed like gum. They are also extremely fragrant, particularly when burned, with frankincense giving off a sweet, citrusy scent and myrrh producing a piney, bitter odor.

Amber - An organic substance preserved in the earth's crust for millions of years. Tulasi Amber acts as a protective mechanism against diseases and insect infestations.

Cinnamon: The effects of aromatic cinnamon are stimulating, healing and carminative. Tulasi Cinnamon is one of the most elegant fragrances.

Lavender - emanates the fragrance that is reminiscent of a a million lavender flowers in bloom. Known as the magic healer, Lavender is an effective antibiotic and pain reliever. Tulasi Lavender incense creates a pleasant soothing atmosphere in your home. Known to relieve stress and anxiety.

Musk: Musk is known in ancient oriental tradition as the perfect aphrodesiac. Use this exquisite Tulasi Musk incense to create a sensual atmosphereSage:

Patchouli - This essential oil is distilled from the dried branches of patchouli, a member of the Lavender family. The Tulasi Patchouli fragrance helps you get a good nights sleep and is a soothing relaxant.

Rose - A marvelously feminine fragrance. The Tulasi Rose aroma calms the nerves and is a great stress reliever

Sage has many medicinal benefits. The Tulasi Sage fragrance is a wonderfully light scent to sooth and calm your senses.

Sandalwood - a part of Ayurveda, an Indian system of healing. Tulasi Sandalwood has a rich, woody aroma which provides a relaxing and supporting environment for meditation and well being.